Programming and mathematics have much in common, philosophically. The disciplines deal with constructions of various kinds. The constructions can get arbitrarily complex and interconnected. As a result, it’s no surprise that concepts such as overloaded notations, implicit coercions and inheritance pop up frequently in both disciplines. For instance, a field inherits the properties of a ring, which in turn inherit from Abelian groups. The symbol + can mean different things depending on if we’re talking about vector spaces or coproducts. Mathematical structures even exhibit multiple inheritance. For instance, here’s the dependency graph of the real number type in the mathcomp-analysis library. 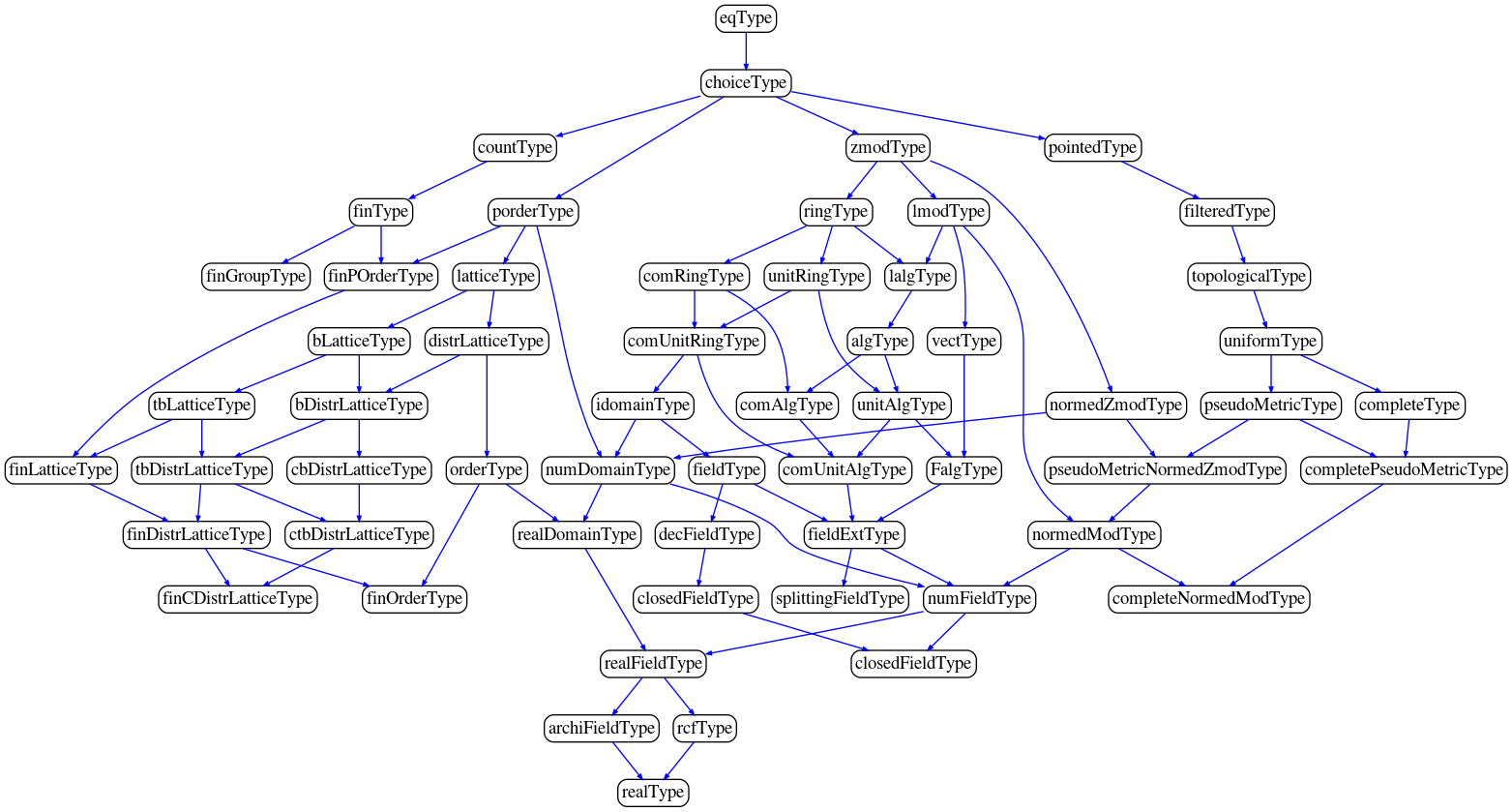 From left to right, the structures can be roughly classified as pertaining to order theory, algebra and topology. For the object-oriented programmer: how many instances of multiple inheritance do you see?

It’s important to capture the way structures are organized in mathematics in a proof assistant with some uniform strategy, well-known in the OOP world as “design patterns.” In this article I will catalogue and explain a selection of various patterns and their strengths and benefits. They are (in order of demonstration):

For convenience as a reference I will start with the most recommended elegant and boilerplate-free patterns to the ugliest and broken ones.

The running example will be a simple algebraic hierarchy: semigroup, monoid, commutative monoid, group, Abelian group. That should be elaborate enough to show how the approaches hold up in a more realistic setting. Here’s an overview of the hierarchy we’ll be building over a type A:

You may also see ssreflect style statements such as associative add.

Then, if all goes well, we will test the expressiveness of our hierarchy by proving a simple lemma, which makes use of a law from every structure.

A well-known and vanilla approach is to use typeclasses. This goes very well, our declaration for AbGroup is just the constraints, similar to how it would be done in Haskell. However, pay special attention to the definition of AbGroup, there’s a ! in front of the ComMonoid constraint to expose the implicit arguments again, so that it can implicitly inherit the monoid instance from G.

The example lemma is easily proved, showing the power of typeclass resolution in unifying all the structures.

See the accompanying gist for the instantation of the structures over ℤ.

The Hierarchy Builder (HB) package is best described as a boilerplate generator, but in a good way! From a usability point of view, it is similar to typeclasses.

First we define semigroups. HB.mixin Record IsSemigroup A declares that we are about to define a predicate IsSemigroup over a type A, and the two entries in the record denote the binary operation and its associativity, respectively. We also define an infix notation for convenience.

Next we define monoids. Similarly to semigroups we use the mixin command, but now declare the inheritance by of IsSemigroup A. That is, for a type to be a monoid, it must be a semigroup first.

Now that we’ve seen two examples, there’s no surprises left on how to define commutative monoids and groups.

Now for the interesting part. Hierarchy Builder makes it easy for us to do multiple inheritance and combine the constraints, much like typeclasses. Then we can seemlessly prove the lemma exactly as we did before.

The underlying code it generates follows a pattern known as packed classes (elaborated in the next section). For future-proofing, the generated code can be shown by prefixing a HB command with #[log]. When the HB.structure command is invoked, a bunch of mixins and definitions are created. For brevity I’m omitted some of them here.

In more detail, here is the output of Print Top_AbGroup__to__Top_ComMonoid., which shows that it is a coercion that lets us go from an Abelian group structure to a commutative monoid structure (i.e. going back up the hierarchy.) Hierarchy Builder automatically creates these coercions and joins for us.

It is worth noting that the math-comp library is undergoing a transition to use Hierarchy Builder in the future, instead of hand-written instances and coercions.

In the math-comp library, the approach taken is known as the packed classes design pattern. It’s a fairly complicated construct that I might elaborate more in a future blog post, but I’ll give some highlights and a full example.

Note that math-comp is being ported to Hierarchy builder, so this style is being phased out.

According to the Mathematical Components book,

Telescopes suffice for most simple — tree-like and shallow — hierarchies, so new users do not necessarily need expertise with the more sophisticated packed class organization covered in the next section

Here’s how to define a monoid. We create a module, postulate a type T and an identity element zero of type T, and combine the laws into a record called law. The exports section is small here but we export just the operator coercion.

With that defined, we can instantiate the monoid structure for booleans (note that zero is automatically unified with true).

Let’s define a semigroup using one of the most basic features of Coq, records. Writing it this way means it is simply just a conjunction of laws as an n-ary predicate over n components. We define the semigroup structure first, then consider monoids as an augmented semigroup.

Unfortunately we already have to make an awkward choice to do some sort of indexing to access the underlying shared associative binary operation. At the next level when one defines groups as an augmented monoid, the situation only gets worse:

We have to access the operation through two different indexes for it! Perhaps we might want to add a member to the record that is equal to the inherited operation, but this too is not satisfactory since it prevents us from creating a canonical name for the operation in question (for instance, add), and we’d have to do this at arbitrarily nested levels. Thus, while flexible, this approach does not scale.

One approach, seen in CPDT is to use the module system to organize the hierarchy. It seems fine for the first few structures. We declare parameterized modules and postulate additional axioms upon the structure from which it is inheriting from.

However, we immediately run into an issue when trying to create a Abelian group from a commutative monoid and group, this is because the carrier type A is already in scope from the first include, so we cannot share the carrier type (or even the underlying monoid) with GROUP. So we give up.

Just like software engineering, there are many ways to organize mathematical theories in proof assistants such as Coq.

Personally, I would lean more towards organizing my theories with Hierarchy Builder—or at the very least, typeclasses, if external dependencies are an issue.