Admist all this talk of market making and economics, one idle evening during the summer of 2022 I wondered, “could I do arbitrage on a Minecraft server?” The answer was not only yes, but it was incredible to witness the extent to which by doing essentially nothing but trades I was able to accumulate tens of thousands in virtual currency. I’m not going to say which server this was performed on, but it should be straightforward to do the same in other economy-based servers.

Note: after essentially exercising all the arbitrage that was possible, a week later prices converged and it was much harder to do.

All’s fair in love and markets

What’s the price of a block of cobblestone? What about the price of gold? There are some heuristics that can help determine pricing, for instance iron blocks consist of 9 iron bars, so any price discrepancy would quickly be ironed out by arbitrage. Diamonds feel like they should be pricey, but maybe it’s unclear what would consistute a “fair” price. Fortunately, economics has the answer to this: let the market decide!

Several Minecraft servers have a buy/sell plugin in which a shopkeeper can stock up a chest with a desired item and set it to buy or sell the item. Some shops even have buy and sell chests for the same item. Of course, no one would be naïve enough to allow arbitrage to be exercised against themselves, so the spreads I observed were always ridiculous, and rightly so. If I don’t really need much of an item, why would be buying it at a high price from people and risk bankruptcy?

But there is no limit to how many stores can be opened and how things are priced. This is where arbitrage comes in. To make matters easier, there are no transaction fees, and the transactions happen instantly. There was also a warp system that conveniently allowed me to teleport to any market that people advertised on a list.

The game, then, was straightforward. Go around collecting buy/sell information from various shops, just as in real markets, observe where a buy price is higher than a sell price, then do the trade.

Here’s a graph showing the net profits after 117 trades. 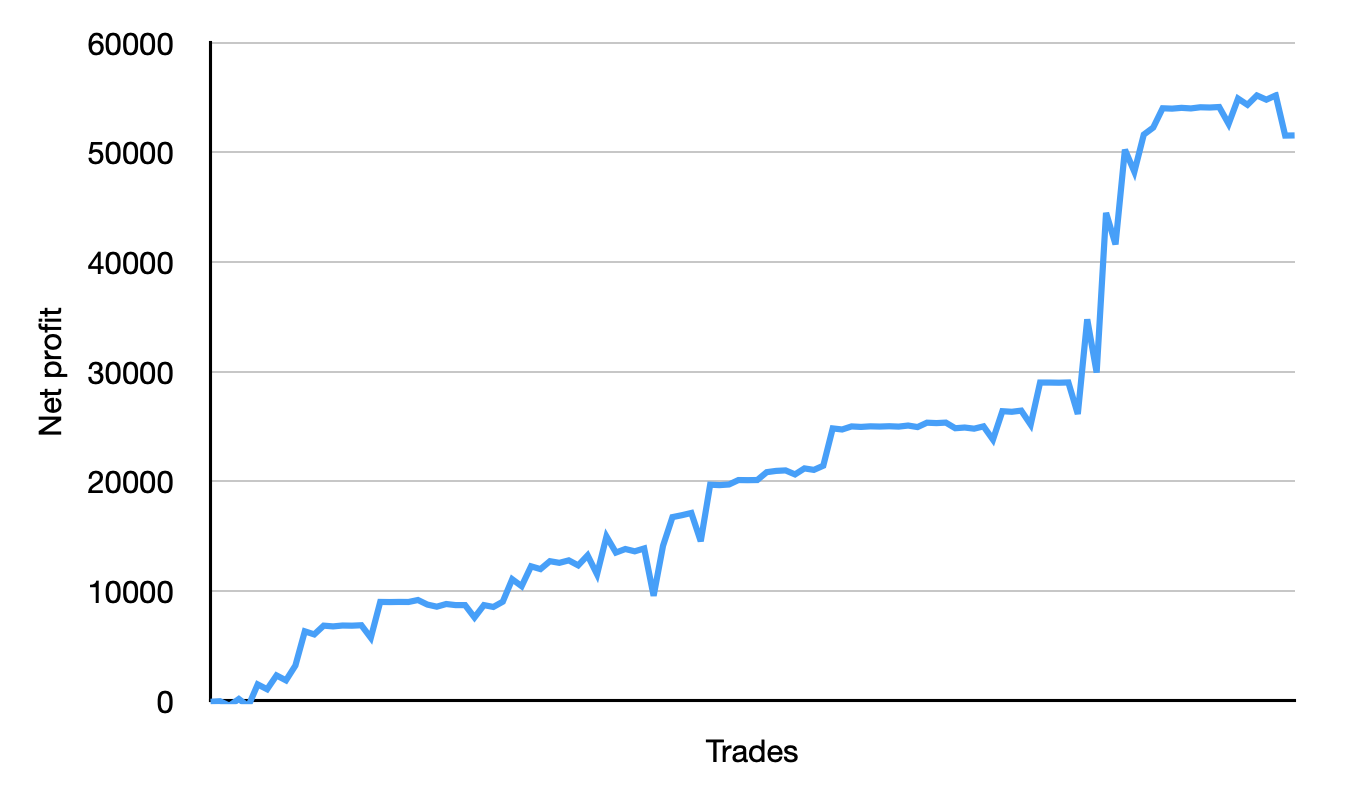 For completeness, this is how the transactions looked when I recorded them. The only unfortunate thing is that from time to time I bankrupted some users (RIP iced logs).

It was also interesting to observe market changes in real time. In one particular instance, gunpowder was being sold by the hundreds from a shop pricing them at $5 each, which was clearly a steal given that another shop is happily buying them at $15. After messaging the shopkeeper several times as I kept buying them out of gunpowder, I watched as the price rose to $7.5 then $10. That’s price convergence right there.

Some thought experiments that I did not implement but might serve as suggestions for the interested reader: